Looking Back on TEA Leaves Past

Some time in 1991 or 1992, TEA’s first-ever newsletter was produced. It was called TEA Leaves. There were no computer design programs, just a bunch of volunteers who wrote and illustrated it by hand, photocopied it and distributed it to TEA supporters by Canada Post and at events. TEA Leaves chronicled the successes a very young TEA had and became an information source for Torontonians who wanted a greener Toronto.

Those involved in the first TEA Leaves, including TEA’s current Executive Director, never dreamed how much good TEA would accomplish over the next 25 years and how the internet would change how we connect and consume information.

We stopped producing TEA Leaves in 2011 when we realized the idea of a paper newsletter was no longer sustainable, environmentally and financially. We also realized people were increasingly relying on social media, websites and emails as the best way to stay in touch with TEA and the work we are doing. 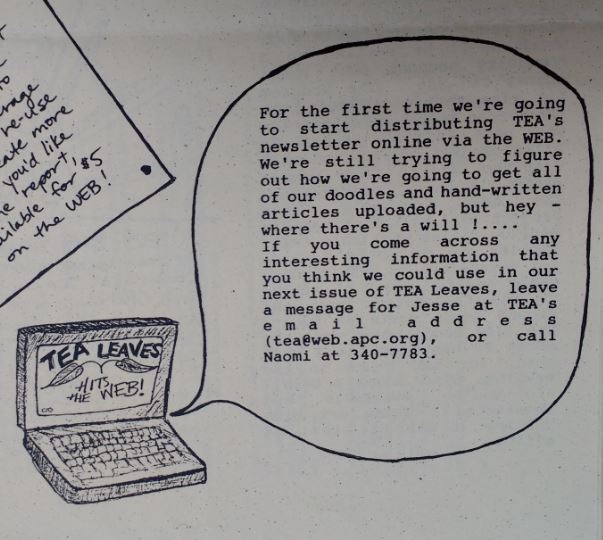 As most of you know, TEA has been sending out Council Watch, our e-newsletter for over 15 years. It started as a newsletter focusing on City Council activities and evolved into a digest of TEA activities. At a recent staff meeting, we thought it was time to revamp Council Watch, starting with a new name that better reflected our e-newsletter. After some discussion, it became clear the new format we wanted was similar to the old TEA Leaves.

So, in honour of our past, we’ve brought back the name TEA Leaves for our new monthly digest e-newsletter. For supporters who are still interested in what happens at City Council, TEA will be doing a blog after every City Council meeting giving you updates on important environmental decisions. We’ll let you know via Facebook and Twitter when the Council Watch blog is posted and we’ll link to it in TEA Leaves.

We hope TEA Leaves will inspire you as much as it inspired Torontonians back in the early 1990s. TEA has accomplished so much since then and we’re proud to bring back TEA Leaves as the way to chronicle how we are building a greener city for all.

For more information on our history take a look at the TEA Leaves Archives.

Sign up for the newly relaunched TEA Leaves here.