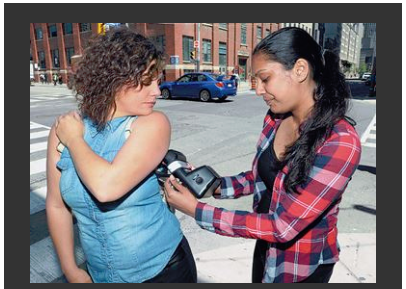 Photo caption: Toronto Environmental Alliance (TEA) campaign director, Heather Marshall (left) and climate change campaigner Dusha Sritharan demonstrate the use of a mobile air particulates monitor on Tuesday at the intersection of Richmond and Duncan Streets. TEA is in the midst of an initiative that has volunteer community air trackers carrying devices in order to map the city's air quality.

Every day here in ‘The Big Smoke’, each of Toronto’s more than 2.79 million inhabitants inhales an average of 22,000 times– totalling 61.38 billion collective daily breaths.

Is it any wonder, then, that in a city whose air pollution is estimated to give rise to 1,300 premature deaths and 3,550 hospitalizations each year, that many residents have begun to take a more vested interest in learning just what it is they’re breathing in on a daily basis?

The Toronto Environmental Alliance (TEA) doesn’t think so – in fact, the not-for-profit environmental watchdog banked heavily on Torontonians’ willingness to take a hands-on approach to air monitoring with the launch of the Initiative for Healthy Air & Local Economies (INHALE) Project.

“What we’re doing with INHALE is making the invisible reality of air pollution visible for people, using tools like mobile air quality monitors and our Fresh Air Finder map to make them more aware of the fact that air pollution still poses risks to their health,” Marshall said of the Metcalf Foundation-funded project, which has attracted more than 150 volunteers in Toronto.

As those volunteers pound the pavement around their local neighbourhoods, the monitors automatically draw in air and count the volume of fine particulate matter (or PM2.5, defined as those particles 2.5 microns or less in diameter) that passes through its internal laser.

“Our monitors are such a unique tool, in that they can make people understand that, even though you might not see them, (these particulates) are definitely out there in the air we breathe and they can have an impact on people’s health,” said Dusha Sritharan, TEA’s climate change campaigner.

Defined by the Ontario Ministry of the Environment and Climate Change (MOECC) as “the term used for a mixture of solid particles and liquid droplets in the air,” particulate matter can include anything from aerosols, smoke and fumes, to dust, ash and pollen.

But it is the smallest amongst these particles of matter – the PM2.5 particulates that TEA’s INHALE Project focuses on – that ministry officials assert cause the greatest adverse health effects, especially amongst people with asthma, cardiovascular or lung disease, as well as children and elderly people.

Those particles – which can include cancer-causing heavy metals, carbon, and gas-related particles like benzine – Marshall added, are “the ones that get into your lungs and are really hard for your body to deal with.”

To those ends, all street-level data collected thus far by TEA volunteers who have participated in the INHALE pilot project – the monitoring of which kicked off in south Etobicoke last summer and just launched in Toronto’s downtown core last month – has been collected, collated, and illustrated on TEA’s Fresh Air Finder online map at inhalemap.com

“With south Etobicoke, what we consistently saw with the data – especially for areas along Lake Shore Boulevard – was pretty poor air quality,” Marshall said, pointing to the many red zones on the map in the New Toronto area, which she said is considered a virtual ‘tree desert’.

While south Etobicoke was chosen by TEA as one of its INHALE pilot project study areas because of its rapidly changing condo landscape, waterfront location and urgent transit needs, Marshall said the downtown core study area – bounded by Dupont to the north, DVP to the east, waterfront to the south, and Bathurst to the west – was selected for its bustling nature.

“We’re here in a very, very busy area, with tons of construction going on all the time and lots of idling cars during rush hour,” a monitor-toting Marshall said, walking near TEA’s Entertainment District area offices on June 14.

In the span of just one city square city block, Marshall’s monitor displayed PM2.5 readings that jumped from the mid-300s at the foot of TEA’s relatively quiet Duncan Street offices, to well into the 3,000s on construction- and traffic-heavy Richmond Street.

According to a Toronto Public Health report (Path to Healthier Air: Toronto Air Pollution Burden of Illness Update), more than half of Toronto’s air pollution is emitted within the city’s boundaries itself – with the biggest local source being motor vehicle traffic.

For TEA, such staggering stats only strengthen its members’ resolve to ensure the INHALE project nets results.

“For us, the INHALE Project isn’t just a way to activate community members to get involved – although it’s certainly been successful in that. Our big focus as an environmental organization is to see major changes in what we, as a society, do to improve air quality,” Marshall said, citing anti-idling campaigns and tree-planting initiatives at the local level, as well as larger-scale discussions about transit expansion and particulate matter bylaws.

“So our next step with this project is going to be talking about how we can use this data that our INHALE volunteers have collected to engage with decision-makers and to prompt air quality solutions in the community. Cleaner air is our ultimate goal.”

For more information, go to www.inhaleproject.ca