Turning a Small Victory into a Big Victory

City Council’s most recent meeting was a heated debate on priorities for the 2017 City Budget and resulted in a mixed bag of wins and losses for climate action.

Leading up to the meeting, TEA and many other community advocates were pushing Council to stop cuts to essential services and invest in priorities like climate action and poverty reduction.

At the Council meeting, there were a number of important votes connected to climate change. Most importantly there was a vote on funding Toronto’s new TransformTO climate action plan which sets out the actions required for achieving our 2020 reduction targets.

Back in December, Council adopted the new climate action plan with no funding to implement it. Staff from the City prepared a report requesting $1.6 million in the 2017 budget to get started on crucial actions as part of the climate action plan. TEA worked with many other climate groups to push the Mayor and Council to secure this funding.

Although we weren’t able to secure the $1.6 million for this year’s budget, it was very encouraging to see Councillors across the political spectrum voting in favour of funding the climate action plan. Find out how your Councillor voted: 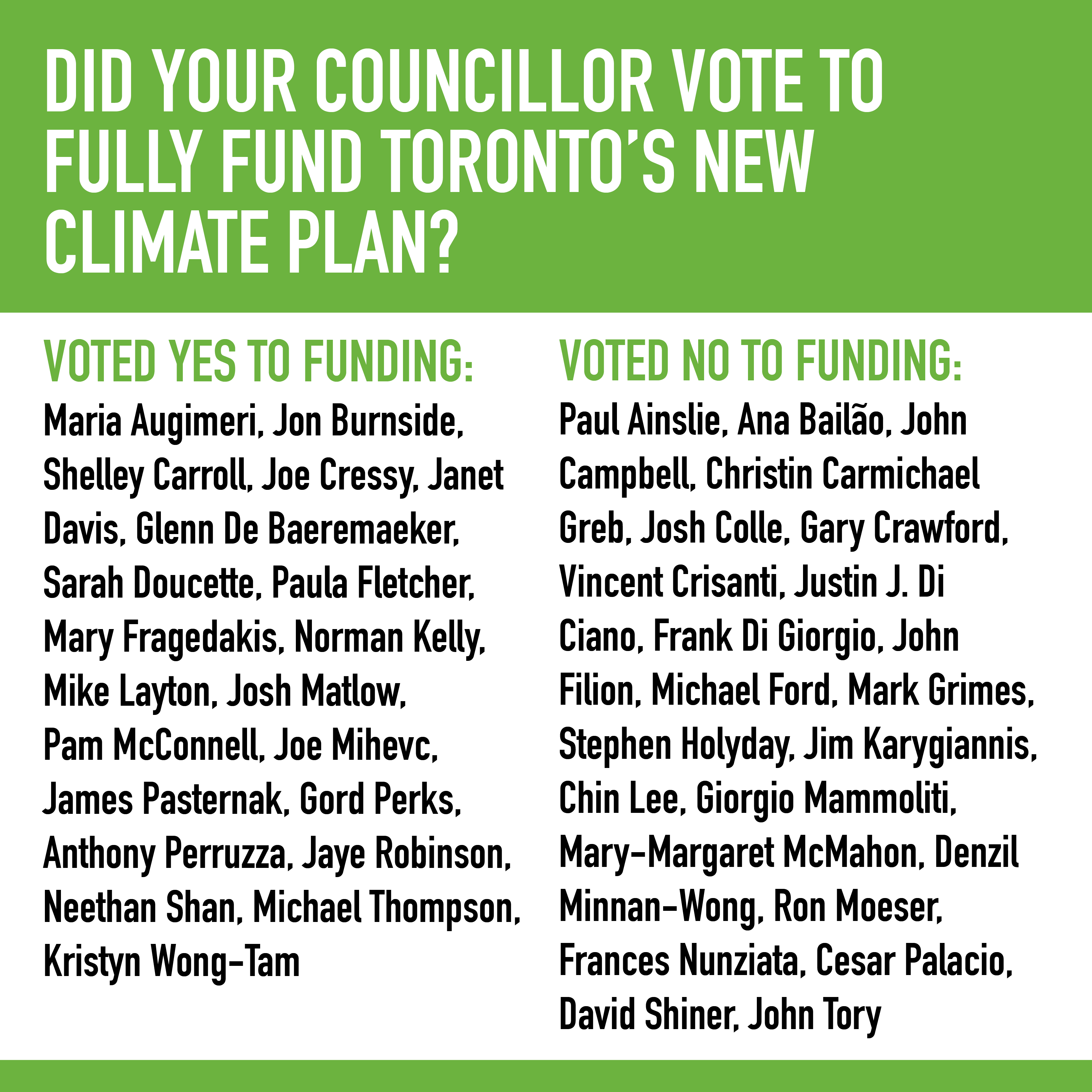 In addition to these climate action plan votes, Council also considered other important investments related to climate change as part of their final budget. Many programs and services such as shelters and cooling centres help vulnerable people during extreme weather events. Council voted in favour of increased funding for low-carbon public transit and cooling centres. However, Council voted to cut back on funds for shelters and public pools.

Although there were wins and losses in this year’s budget, we have made great strides forward in securing support for climate action.

TEA’s work on the ground

Since the launch of the climate plan in November 2016, TEA has been working on the ground to build support for climate action. With all of the budget pressures and program cuts facing our city, we knew that winning any amount of climate funding in this year’s budget was going to be a hard sell.

TEA worked in partnership with groups like CarbonFreeTO and members from the Toronto Climate Action Network to build grassroots and political support for funding the climate action plan.

The proposed budget had a number of cuts to existing city services that would simultaneously undermine poverty reduction efforts and our ability to respond to climate change. So TEA worked in partnership with the Toronto Can Do Better campaign to call for investments in important services including public transit, affordable housing, shelters and the climate action plan.

Through our door-to-door and online actions, TEA’s amazing supporters helped us gather over 900 letters and messages to Councillors in support of funding the $1.6 million. This played a key role in showing Councillors and the Mayor how important these issues are to the residents of Toronto.

Our success in securing climate action funding in this budget is an important step for paving the way for bigger victories in the future. In May, the City will release it’s second TransformTO report outlining a range of actions we need to take in order to achieve a 80% reduction in GHG emissions by 2050.

We know that Toronto can and must do better on climate action moving forward. We’ll be focusing our efforts on engaging residents to support actions that reduce our impacts on the climate and make us more resilient to change. This will also involve calling on the Mayor and Toronto City Council to invest significant dollars in the climate action plan.