The province says this summer's accident has been cleaned up, but Toronto Wildlife Centre reps have lingering concerns

Toronto Wildlife Centre (TWC) has released the last of the 111 oil-smothered ducks rescued from Mimico Creek after a spill from an overturned truck, but enviros say the threat to wildlife is far from over.

A transport truck carrying transformers rolled over at 427 and 401 earlier this month, dumping some 6,000 litres of petroleum-based oil. Storm sewers carried the slick down to Mimico Creek, where TWC rescued most of the birds, and into Lake Ontario. A spokesperson for Ontario’s Ministry of the Environment and Climate Change says the spill was vacuumed up and “all impacts to the Creek were remediated.” But questions remain. 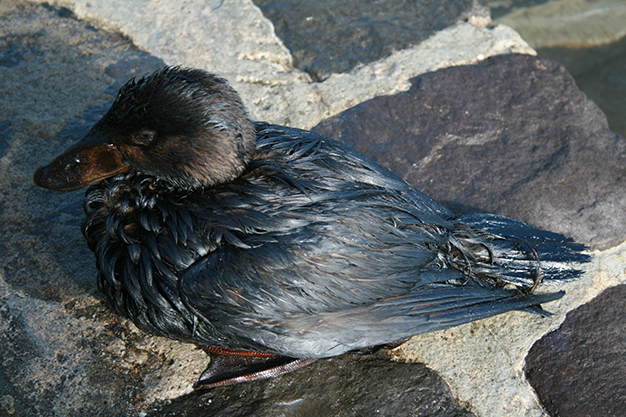 But TWC’s director, Nathalie Karvonen, has lingering concerns. On top of the two birds still getting medical care and the 30 that didn’t make it, “we know there are a handful of birds still out there with oil on them that are elusive but need help. There have surely been impacts on all levels of life in the creek, but that is something we won’t ever know about. Someone would need to do a detailed (and costly) study to truly find out.”

Toronto Environmental Alliance toxics campaigner Heather Marshall says old transformer oil can be contaminated with highly hazardous PCBs. Even if the transformers are new, as the Ministry says they were, Marshall notes that certain types of mineral oil contain persistent bioaccumulative toxins and have also been linked to cancer.

Says Marshall, “Toronto’s creeks and rivers need to be protected from hazards like oil spills, and that requires taking precautionary steps to avoid -future disasters.”

While she was glad to see citizens stepping up to save the ducks, she raises the spectre of a spill from Enbridge’s Line 9 pipeline, which is set to start pumping 300,000 barrels of tar sands crude through Toronto and southern Ontario daily.

“We need to see an even greater civic effort opposing Line 9, which presents a much larger and widespread threat to Toronto’s waterways and the species that call it home. We have an opportunity to stop these spills before they happen, which is far better than waiting around for the next oil slick.”

See the original article at https://nowtoronto.com/news/ecoholic/warnings-from-mimico-creek-s-oil-spill/