We asked: "What do you want to say to Doug Ford about this so-called climate plan consultation?"

Since being elected, the Ford Provincial government has cut the Cap and Trade program, cancelled our climate action plan and now they are cutting the independent body that monitors the government’s compliance with our Environmental Bill of Rights.

At the same time that all of this is going on, the Provincial government is supposedly developing a new climate plan to replace the one they scrapped - but they only asked Ontarians one question - 2 weeks before the plan will be released. Is that real consultation?

TEA is concerned about these threats to climate action and the lack of transparency and accountability to Ontario residents. And we know many Torontonians are, too.

So, we asked Torontonians a question by email: "What do you want to say to Doug Ford about this so-called climate consultation?" 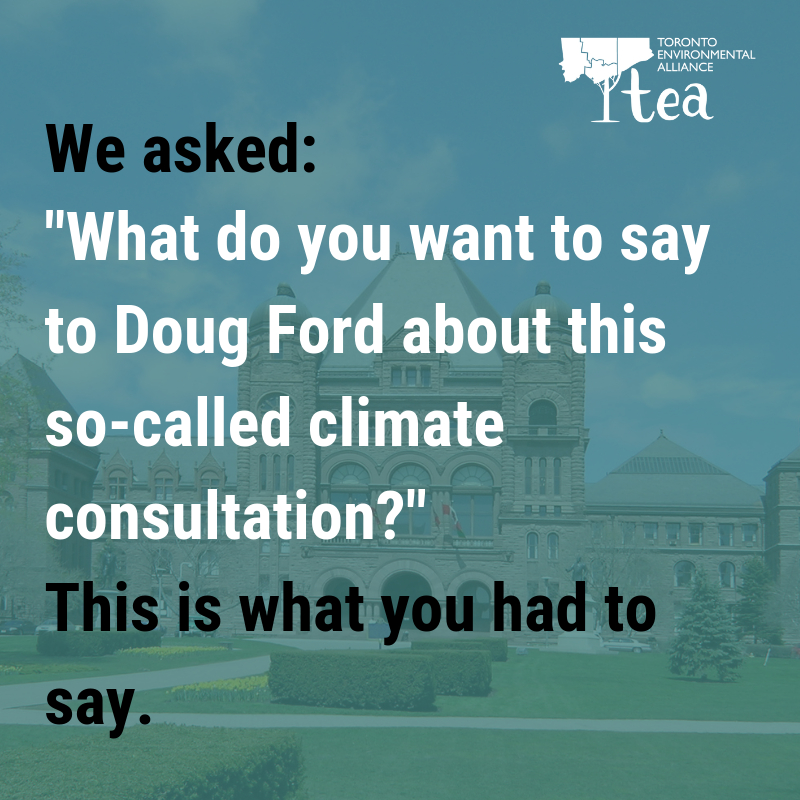 We attached an appendix to our submission of comments submitted to us online.

Here's some of what we heard.

I’m concerned that this Ontario PC government is gutting any programs related to protecting our Environment and our Health. Please consider the importance of a climate plan that prioritizes equity, prosperity and job creation and of the need to respond to the urgency of climate change.

Any short-term savings will have long-term negative effects and future costs!

Scientists around the world are in overwhelming agreement that climate change is the most important issue of our time. It threatens the health, well-being, and prosperity of all Ontarians. Coming up with a comprehensive, effective, and decisive climate change plan must be a priority for your government, but that requires REAL, in-depth consultation. Such a consultation is not taking place. It is time to get real on climate change. If you don’t take it seriously, we will all suffer and you will put our future in jeopardy. 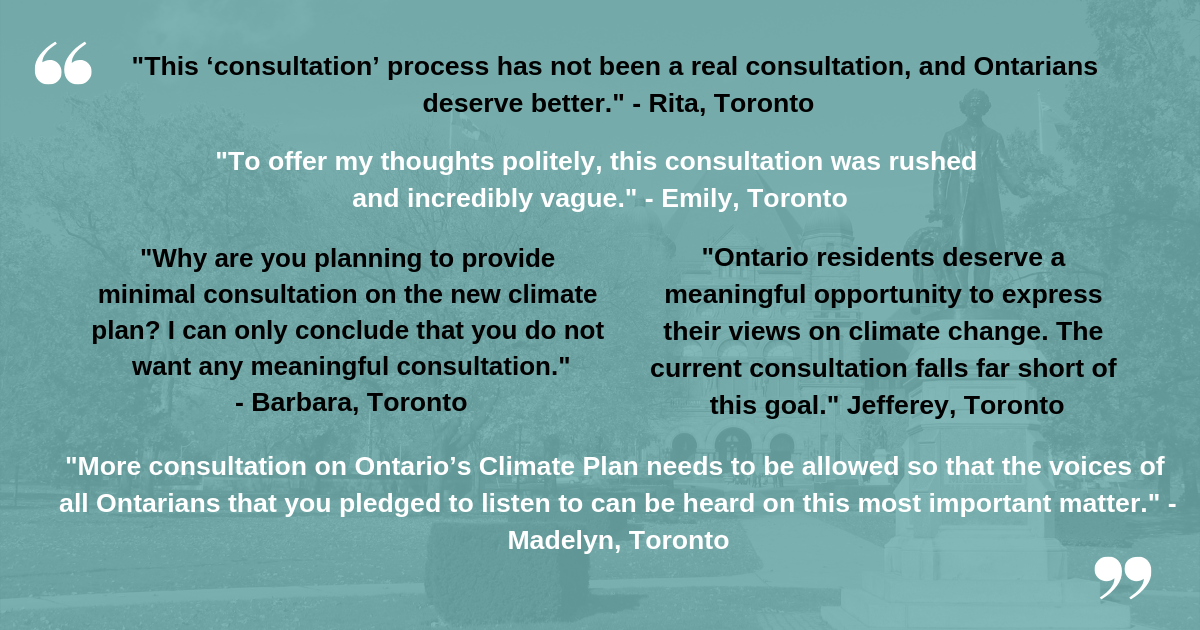 It is absolutely unreasonable to call this a consultation. The people of Ontario are concerned about the environment, and we deserve to have our voices heard!

This ‘consultation’ is a sham. After dismantling climate policy that has taken years to put in place, you have eliminated the office of the ECO, the watchdog who best understands our existential predicament. These actions are not those of a government “for the people”, but of an entity that has little regard for the common good, and indeed is acting in breach of public trust. This ‘consultation’ process has not been a real consultation, and Ontarians deserve better.

To offer my thoughts politely, this consultation was rushed and incredibly vague.

Every member of this government that supports the ripping apart of every existing attempt to effectively mitigate the effects of climate change will have to explain to their children and grandchildren why you didn’t care enough about them to give them a future with clean energy and less pollution. Deciding that you won’t do anything to try to solve these problems and removing those people who have a chance to do so, sets a horrible example and is equivalent to negligence. Future generations will not thank you, nor will the taxpayers who deserve better.

I am concerned to learn that promised consultation with citizens of Ontario is not comprehensive enough nor timely enough to allow for concerns to be considered and acted upon.

I am getting more and more worried about how this government is railroading their agendas into place … without proper consultation from the public!

Ontario residents deserve a meaningful opportunity to express their views on climate change. The current consultation falls far short of this goal.

TEA submitted these comments as an appendix to our submission on Friday, November 16th. Our submission on this "consultation" echoed many of the points that TEA's Climate Change Campaigner shared a hearing on the cancellation of cap and trade and the climate plan. You can read a transcript of TEA's speech here.