We are profiling the stories of success from buildings participating in the Zero Waste High-Rise Project. Learn more about how Pavilion Del Sol became a model zero waste high-rise, thanks to the presence and efforts of a strong resident Green Team.

Pavilion Del Sol is a condominium building in North York, built in 1989. The building is a single tower with 19 stories and 140 units. The building joined the Zero Waste High-Rise Project in Winter 2018. 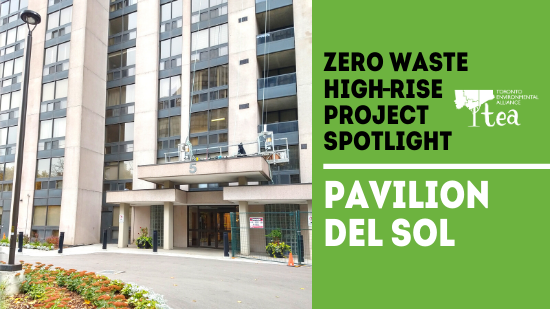 The building team: The project building team is led by the resident Green Team with active support and participation by building staff, property managers and the condo Board of Directors.

The Green Team at Pavilion Del Sol sought input and support for a new sharing shelf in their condo.

The resident-led Green Team is a trusted presence at Pavilion Del Sol - a source of information for residents, and a support to staff and management in addressing issues. They help to identify environmental and sustainability issues that are important to residents and staff, and to find solutions that make sense for everyone.

As part of TEA’s Zero Waste High-Rise project, Green Team members and staff learned about zero waste activities in leading buildings. The Team saw that a few model buildings had a ‘sharing shelf’ for residents to leave unwanted household items in good condition - like toys, dishes or housewares - for neighbours to take for free. 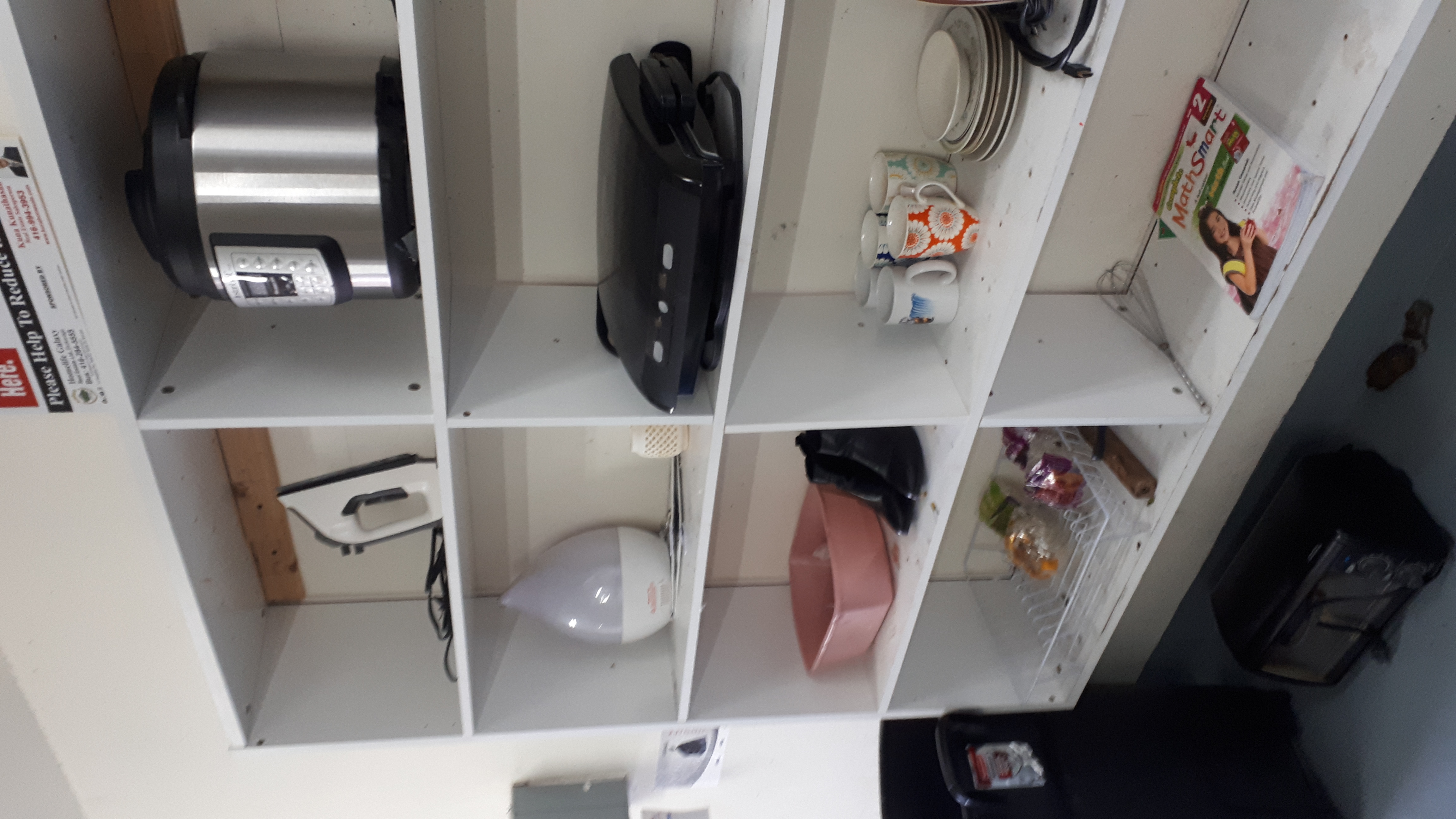 The Green Team noticed the sharing shelf at Mayfair on the Green as part of the Zero Waste High-Rise project’s peer-learning opportunities.

Green Team members noticed that in their own building, useful items in perfect condition were getting thrown in the garbage, or worse, the recycling bin. This is not only a waste, but creates extra work for staff who try to remove these ‘contaminants’ from the recycling stream. The Green Team decided that adding a sharing shelf to the building's recycling room would help solve this problem.

Sally, the Green Team chair, knew that staff support was essential, so as a first step she reached out to the building’s superintendent, Stefan. He was concerned that adding a shelf to the recycling room would get in the way of his cleaning.

To address his concern, Sally found a sturdy shelf on wheels that Stefan agreed would work well: it could be moved easily out of the way for his maintenance work. Green Team members also agreed they would check on the shelf multiple times a week to keep it tidy, ensure that things left behind are in good condition, and donate things that have been there too long. 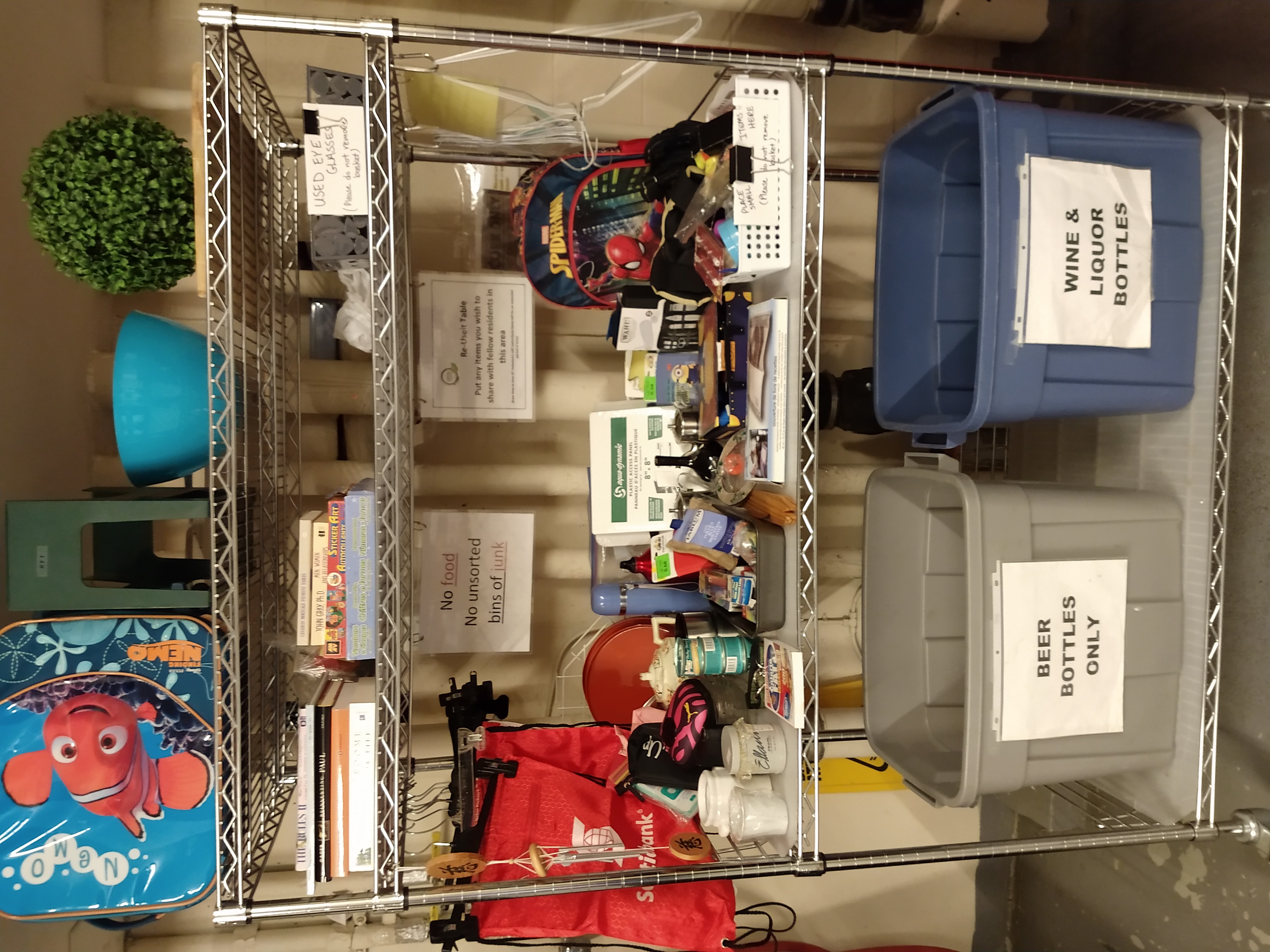 The Green Team developed a proposal for the Board that outlined their plan to address Stefan’s concerns, and for managing the shelf. By thinking ahead to address potential issues from staff, they won the Board’s support to start the Reuse-It shelf without delay.

Residents enthusiastic about reusing and sharing

The Green Team announced the new Reuse-It shelf in the building newsletter and posted notices in the Recycling Room along with simple instructions to keep things running smoothly - for example no perishable or non-working items.

Since its launch, the shelf has been popular with residents who are thrilled to have the option to reuse. 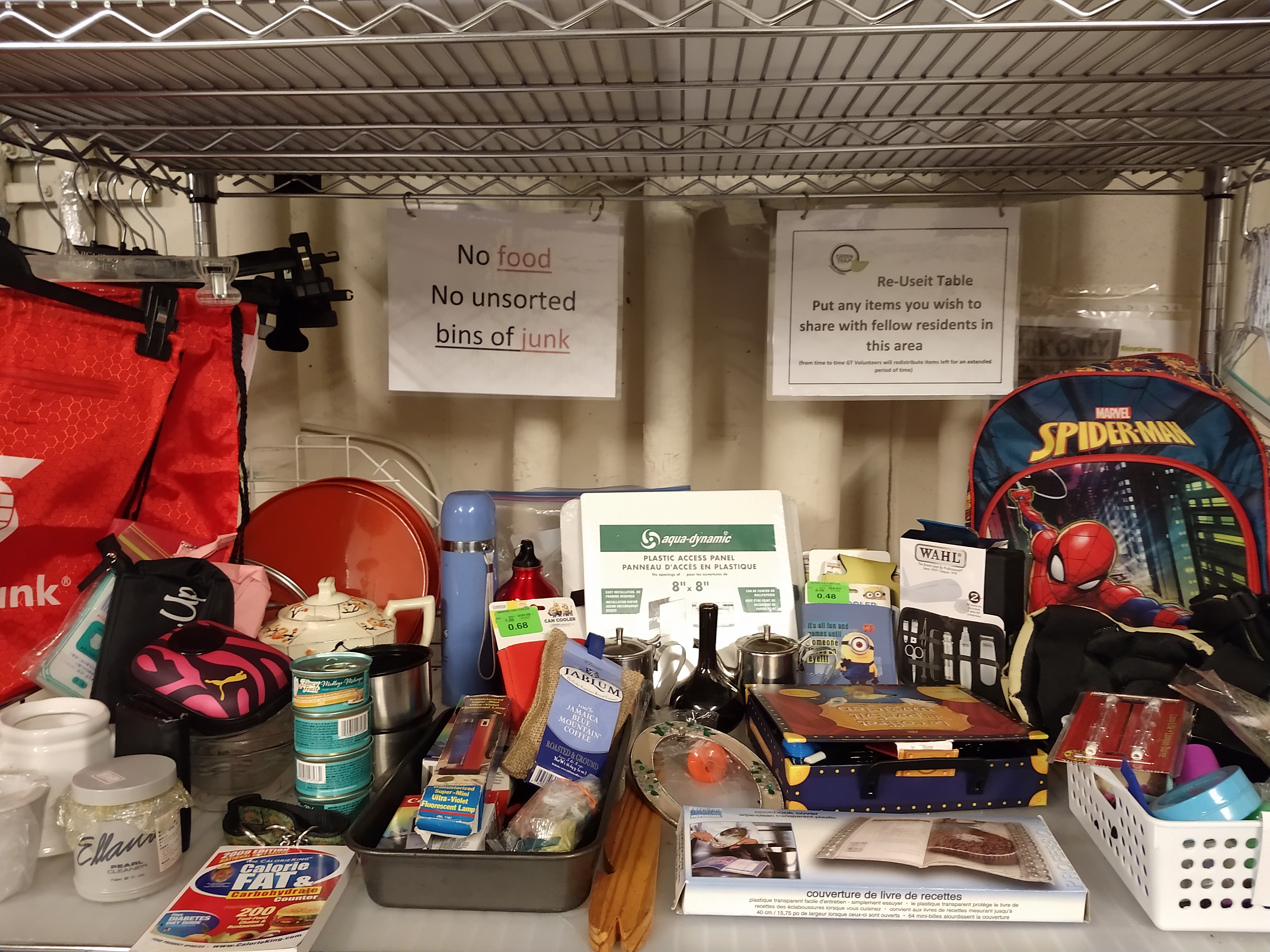 Sally notes: “People leave lots of nice stuff - people don’t mind leaving nice things if they know someone from the building will be able to use it. Once a laptop in good condition was left, and a Men’s haircut set in its original box; there’s also lots of nice plates and china.”

Green Team members also report they’ve rarely had to throw things in the garbage. One technique they use is to refresh the shelf by routinely rearranging how goods are displayed - or “Re-merchandise” it as they call it. This simple act helps draw the attention of residents and keeps the goods moving. “People like to swing by and take a peek at what’s new,” notes Sally.

The Green Team closed the Reuse-It shelf as a precautionary measure for COVID-19, but started it up again in September due to popular demand by residents. The Team added reminders for all residents to follow public health and safety guidelines when taking and leaving goods.

The ongoing efforts of the Green Team to seek out and implement new ideas to reduce waste are paying off. Stefan reports spending less time removing contamination from recycling because of the Green Team's initiatives. By working in partnership with the property manager and staff, they’re also contributing to a stronger sense of community.

"It used to be a one man show where [the superintendent] goes in there, sorts through recycling bins and garbage bins and tries to make sure that people are throwing things in the right bins... So the fact that he has other people in the building from our community, specifically our green team helping out, makes a huge difference. It takes the work off his shoulders and it helps our building be more environmentally friendly. So, it’s win-win for everybody." - Property Manager

How they did it: