CLIMATE AND THE 2021 CITY BUDGET: Report back from the final City Budget vote

On February 18th, City Council passed the 2021 City Budget. Read our blog for an update on funding for climate action in this year’s budget.

We worked with allied organizations, communities and individuals to advocate for a City Budget that gets Toronto back on track with delayed climate emergency commitments, and advances critical city-wide priorities such as housing, transit, childcare and community safety. We analyzed the budget, delivered deputations, submitted written recommendations to the Budget Committee, partnered with other organizations to host a budget advocacy training, and directed hundreds of letters to the Mayor and Council before the vote.

Hundreds of people took action, and your messages to Councillors helped to keep climate on the agenda. We delivered a strong message calling for the City to get back on track with Toronto’s climate emergency commitments.

However, Council voted against a motion to restore crucial funding to climate action, demonstrating the need for sustained public pressure. 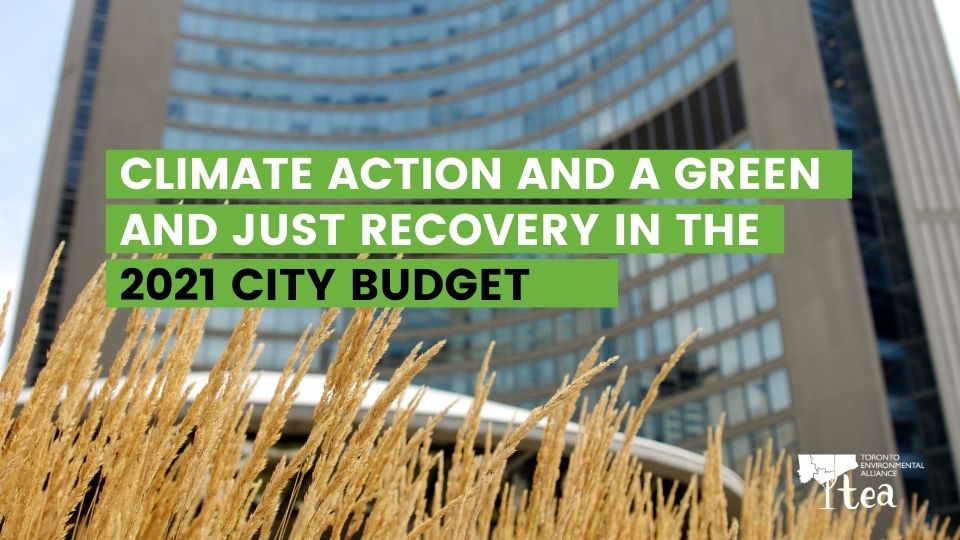 What happened at Council

Funding for climate action in this year’s City Budget:

We called for proper funding for the Environment and Energy Division - the City Division leading on climate action. Specifically, we called for Council to add $2.3 million dollars back into the EED budget that is needed to deliver on overdue and critical climate emergency commitments, including developing a net-zero emissions strategy, a low-carbon jobs strategy and a climate lens on all City spending decisions.

We were disappointed to see Councillor Mike Layton’s motion to restore $1.4 million to the Environment and Energy Division’s budget for climate action fail. The City is not coming close to funding climate action on the scale needed and the loss of this motion demonstrates that we need to maintain strong public pressure to ensure Council follows through on commitments. We can’t afford to delay climate actions that will ensure we meet our emission reduction targets and bring benefits including good, green jobs. 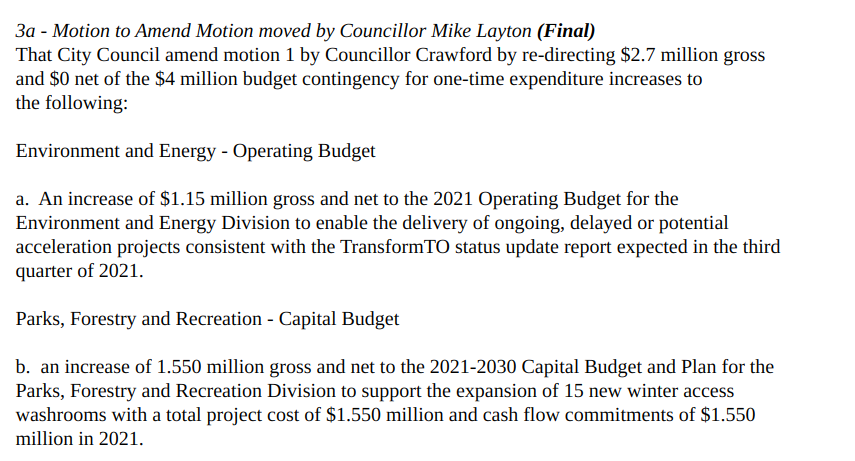 A climate lens on all major City decisions:

A key win in getting the City to declare a climate emergency in 2019 was a commitment to put a climate lens on all major City decisions. However, this commitment has not been strongly applied to decisions taken on the 2021 City Budget.

We did win a step forward on a key commitment in Toronto’s climate emergency declaration on another motion moved by Councillor Layton: to strengthen and apply a robust and evidence-based climate lens to City budget decisions starting in 2022. If the City follows through on its commitment to apply a climate lens to all major decisions - policy, programs and investments - the impact would be transformative. We will continue to advocate to ensure Toronto develops an impactful climate lens approach.

For example, when applied to City's recovery planning, a climate lens would compel decision-makers to consider how economic strategies can generate more good green jobs and training opportunities, creating greater opportunity for more people to participate in Toronto's fast-growing green sector. This approach could also change the outcome of capital decisions, like the decision to rebuild a portion of the Gardiner Expressway versus other capital investments in areas such as public transit and active transportation.

While the groundwork has begun for a robust climate-lens in City decisions, a lot of work lies ahead to make sure this commitment is more than lip service.

A climate lens will be crucial in Toronto’s recovery and rebuild plans and investments. Climate action should be seen as a core part of recovery and not something separate. We must seize the opportunity to make investments in good, green jobs and green, affordable and stable housing.

The City of Toronto has also recognized that transformative action in Toronto will need dedicated and sustained funding. This will require that the city does not delay further in bringing forward bold plans and proposals to draw investments from other levels of government, and take concrete steps to responsibly and fairly generate revenue from tools that it has at its disposal.

SINCE WE WON A CLIMATE EMERGENCY DECLARATION IN 2019, WE'VE BEEN WORKING TO MAKE SURE COUNCIL FOLLOWS THROUGH ON ITS COMMITMENTS. HELP US CONTINUE TO ADVOCATE FOR CLIMATE ACTION AND A BOLD, GREEN AND JUST RECOVERY: