TTC riders along Sheppard can be forgiven for being grumpy following the latest provincial transit announcement, the last in a month long series of announcements designed to create  the impression the Wynne government cares about transit. 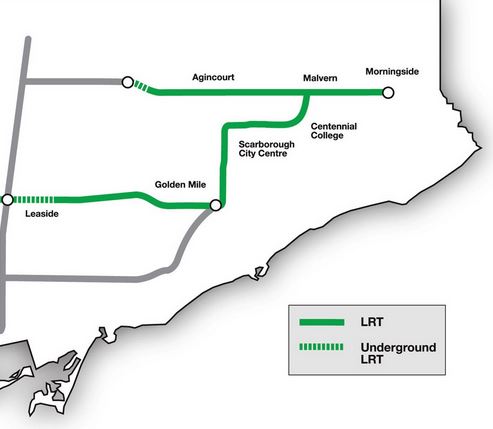 While the Province finally agreed to fulfill its 8-year promise to build the Finch West LRT, it also - yet again - delayed delivering on its promise to build the Sheppard East LRT. TTC riders will - according to the latest promise - now have to wait until 2021 when construction might start. Bottom line: no new rapid transit for northeast Scarborough.

It wasn't meant to be this way.

Back in 2007, Mayor David Miller, with the support of the Province, released the Transit City Plan. One of the Plan's main goals was to build rapid transit as quickly as possible to parts of the city that needed it the most. Sheppard East and Finch West were at the top of the list. Construction even started on the Sheppard East line in 2009 with the goal of opening it in late 2014. Then, the delays started. First, Mayor Ford killed the Transit City Plan in late 2010, with the agreement of the Province. In February 2012, after a two year campaign led by TEA to bring back four of the LRT lines in the original plan, City Council reversed Mayor Ford's decision and put Sheppard back on track, again with Provincial support, with a new opening date of 2021. Since then, transit riders were told Sheppard LRT was truly going ahead. Then, last week, the Province announced the earliest construction would start is 2021.

Sadly, this isn't the first promise the Wynne Government has made on transit that is in serious danger of being broken. Before 2010, the talk was all about building The Big Move, a huge and expensive regional transit expansion plan the Greater Toronto and Hamilton Area needs if we ever hope to deal with congestion. The Government gave Metrolinx, the provincial agency responsible for The Big Move, the job to develop a funding strategy to raise the $50-100 billion needed. Organizations as diverse as The Toronto Regional Board of Trade and the Canadian Centre for Policy Alternatives weighed in and argued it was time for the Province to raise new tax dollars  for public transit. In Spring 2013, Metrolinx, the provincial agency responsible for The Big Move, released its Investment Strategy including raising new tax revenues. In December 2013, an advisory panel  led by Anne Golden -and hand-picked by the Premier- also urged the Province to dedicate new tax revenues to transit (the website and report have since disappeared).  Then in Spring 2014 a public opinion poll showed 60% of respondents would support new taxes to fund transit. Bottom line - everyone was waiting for the Premier to finally raise taxes to fund what we all know we need: better transit.

All eyes were on the Premier in April, hoping the Provincial Government would finally deliver new, dedicated revenue for transit. What we got instead was the promise to sell part of Hydro One, an extremely valuable money-making provincial asset, and the promise to dedicate part of the proceeds to transit and transportation.

Like last week's announcement about Finch West and Sheppard East, the budget announcement seemed like good news but was also the beginnings of a broken promise. Think of Toronto's transit needs like a pair of shoes. We were promised a new pair of shoes and a plan for how to pay for them. Instead, we got the promise of one new shoe without any plan to pay for the other one. It's difficult to be happy about this. But it's not difficult to tell the Premier to deliver on what her Government promised. Otherwise, she may think we're okay moving into the future only wearing one shoe.