We need climate action now. Since a large share of emissions — about 70 per cent — come from cities globally, we are looking to cities like Toronto to adopt strong climate measures and do our part to make a significant impact on global emissions.

However, it can be challenging to navigate the numerous climate policies, strategies, plans, and programs at every level of government.

TEA has put together this brief explainer blog to break down what exactly we need to know about Toronto’s climate plans and strategies - especially as the City’s new draft TransformTO Net Zero Strategy is due to be released!

NOTE: While there are many policies and programs on climate action at the City, this blog is our recap of the high-level climate policies to date.

Essentially, TransformTO is Toronto’s climate plan that covers everything from buildings, transportation, energy, to waste diversion. The plan has goals for the entire city (i.e. community emissions) and within municipal buildings and operations. It can be an overwhelming amount of information to follow - but City Staff provide semi-regular implementation updates. The City has also committed to releasing TransformTO short-term implementation plans every 4 years, but the 2021 plan has yet to be released with the City reporting delays during the pandemic. 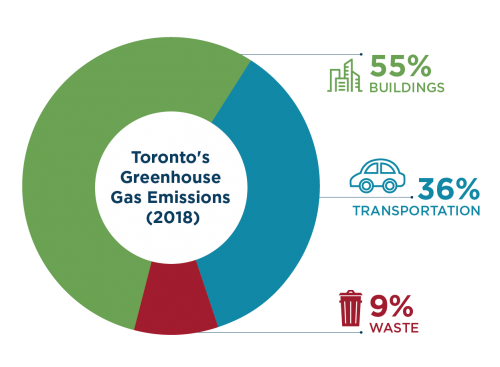 TransformTO was shaped by the advocacy of thousands of individual residents and organizations over more than 5 years. Together, we pushed for ambitious targets and strong equity goals in the climate plan. (Check out Toronto Climate Action Network (TCAN)’s blog for a more detailed account of Toronto’s TransformTO journey.)

However, since being passed, TransformTO has repeatedly been underfunded and under-resourced.

What we won: Climate Emergency Declaration (2019)

It is increasingly clear that we are living in a climate emergency - and our governments need to act like it! TEA came together with other organizations and called on Toronto City Council to declare a climate emergency and ramp up the city's climate ambition.

After strong public pressure, Toronto City Council unanimously voted to declare a Climate Emergency in 2019. This was a big win for our local climate movement. Toronto joined dozens of other municipalities that declared a climate emergency and committed to key actions including more ambitious reduction targets and a commitment to explore new climate financing mechanisms. (Read more about the climate emergency declaration and commitments Toronto made in our previous blog.) Since the declaration, we’ve been watching closely to see how the City follows through on those commitments.

It was critical that this declaration was not just a symbolic gesture, but that it came with tangible, concrete improvements to TransformTO. That brings us to now, with a new net zero strategy on its way.

Where we are now: Net Zero Strategy Update (Coming November 2021)

In its Climate Emergency Declaration, Toronto endorsed a new target of net zero emissions by 2050 or sooner (2040). On November 25th, the City of Toronto will release a new draft of net-zero climate strategy with a 2040 target.

This forthcoming strategy, the "TransformTO Net Zero Strategy," will be the updated version of the current "TransformTO Climate Action Strategy." The draft strategy will be released publicly in advance of the  December 2nd Infrastructure and Environment Committee, where it will be considered by that committee before going to City Council on December 15th.

TEA will be reviewing the draft strategy when it is released. Watch for our next blog with our analysis and how you can take action in support of bold and ambitious climate action.

Climate action needs to be all-encompassing. There are many other City plans and strategies that are focused on reducing emissions and building resiliency, such as the Toronto Green Standard for buildings, the Resilience Strategy, and the Long Term Waste Management Strategy. Other strategies like the Official Plan, Poverty Reduction Strategy and HousingTO also connect to Toronto's climate strategies to reduce emissions and create a more equitable city. The City agreed to apply a "climate lens" to all major decisions but we’re still waiting for real follow-through in the City's plans and budgets.

Where we are going depends on YOU!

We have all faced a global public health emergency that disrupted our lives, communities, and society in unprecedented ways. At the same time, the climate crisis has gotten more urgent. While extreme heat, flooding, and the impacts of climate change are more pressing than ever, people have banded together to demand a green and just recovery for all.

This next net zero climate strategy is critical - we can’t afford any more delays and we have to get it right. We’re monitoring closely to see if the next iteration of Toronto’s climate action plan will deliver on the bold, ambitious and urgent climate action our city needs.

You’ll have a chance to speak up while the strategy is being considered by City Council. (STAY UP-TO-DATE: subscribe to our email updates.)