Earlier today WWF Canada and Pembina Institute released an important new report showing that an energy plan focusing on renewables and energy conservation is the cheaper cleaner and less risky way to keep the lights on in Ontario.

Called "Renewable is Doable" this comprehensive report compares the green energy plan to the Ontario government's current plan to build nuclear power stations and keep coal stations on line until at least 2014. The Renewable is Doable Plan is cheaper, cleaner and less risky.

TEA joins WWF Canada and Pembina Institute in supporting Renewable is Doable. We urge Ontarians to ask provincial candidates to support this plan as well. 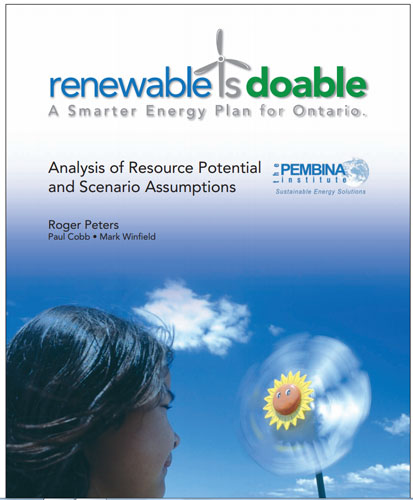 Below is the press release issued by the groups and a link to the report.

WWF-Canada-Renewable Is Doable: Re-Analysis of Government's Own Data Shows Ontario Can Keep the Lights on Without Coal or Nuclear

TORONTO ONTARIO--(Marketwire - Aug. 1 2007) - A cheaper cleaner and less risky option than the current nuclear-reliant Ontario electricity plan, is doable, according to a state-of-the-art modelling analysis commissioned by WWF-Canada and the Pembina Institute and released today.

"Ontario can keep the lights on while saving consumers money and cutting greenhouse gases in half," said Cherise Burda, Ontario Policy Director with the Pembina Institute. "This study shows in vivid detail that there is a cheaper, safer, and greener way to power our future."

The analysis shows that reducing unnecessary energy waste, switching to renewable energy, and recycling waste heat from industrial and commercial operations into electricity will cost consumers less than building new nuclear plants. It also cuts future greenhouse gases from electricity generation in half.

This study comes on the heels of an Environics poll released this week, which shows that Ontarians overwhelmingly (76%) favour shifting to renewable power and conservation. "Renewable is Doable. This is the plan that Ontarians want," said Keith Stewart of WWF-Canada. "We can put an end to smoggy coal without forcing Ontarians to reluctantly accept more expensive nuclear plants and another generation of radioactive waste."

The analysis, conducted using an advanced computer simulation of Ontario's electrical system, uses data from the Ontario Power Authority (OPA), cross-referenced with comparable energy efficiency and renewable energy project performance in the U.S. and Europe. It found that greener energy options can:

- Reduce costs to consumers by 11% against the Ontario Power Authority's Preliminary Plan.

- Cut in half the greenhouse gases that would be emitted by the OPA plan over the next 20 years.

- Phase out coal by 2012 at the latest, whereas a nuclear-based plan commits Ontario to burning coal until 2017.

Read the Renewable is Doable report.

CLIMATE CHANGE Energy AIR QUALITY
Do you like this page?