Last night, a capacity crowd of 200 came out to hear panelists give their ideas about what the city can do get ready for the severe weather climate disruption will bring to Toronto. Another 250 people were on a waiting list to get in. 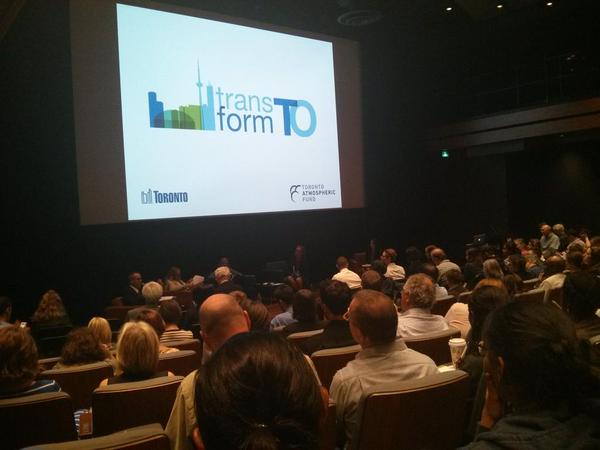 Even before the speakers spoke, the event succeeded by sending a powerful message to City Hall that Torontonians want action.

Using a Q&A format, speakers presented ideas they thought would make Toronto more resilient to the the projected dramatic increase in severe weather events. Most ideas focused on preparing ourselves for what will come, often called climate change adaptation actions. Ideas like emergency planning and community resilience plans were discussed. Interestingly, the head of the Toronto Financial District BIA noted that building resiliency would give Toronto a competitive edge that would attract more businesses to Toronto.

What was missing was a real discussion of how actions that make us resilient to climate disruption can do lots more as well. The audience had to wait until the very end to hear one of the panelists acknowledge that certain resiliency actions can also reduce carbon emissions.

The fantastic news that should have been shared with the audience is that there are a whole number of actions that improve resiliency as well as reduce carbon emissions, and create thousands of good paying local, green  jobs.  An example of this is reducing energy use (and carbon emissions) to increase the capacity of our energy systems to handle new demands put on them by severe weather events (read about this in an earlier blog Conserve Energy and Get Ready for a Severe Weather Future). Another example is planting trees. Trees cool spaces and reduce the need for air conditioning. They also absorb water and reduce the temperature in the city, important resiliency measures. Then, there are green roofs that reduce energy use (cooling and heating) as well as absorb water and reduce the impact on our sewer systems. The list goes on and on...

The large turnout yesterday evening makes it clear Torontonians want a better future. They gathered hoping that their voices will convince City Hall to act. With the right ideas in the ears of decision makers, we may actually transform this looming environmental catastrophe into the biggest environmental and economic success story this city has ever seen.