Perchloroethylene (perc) is one of the top toxic chemicals released into Toronto's air. Since dry cleaners are the main source, TEA has launched a consumer campaign for safer alternatives.

Perc is the kind of chemical that lingers, and I mean that both literally and figuratively.

Perc is a persistent toxic chemical that can contaminate groundwater, soil, and buildings - creating a legacy of contaminated land that is very expensive to clean up. It also creates hazardous waste that must be hauled from the cleaners by a special waste hauler and is banned from municipal landfills. If perc gets into the air we breathe, it is toxic to our health. For people who work with this chemical daily or live above a perc dry cleaner, this puts them at increased risk of cancer, respiratory illness and even neurological damage. Perc also poses risks to the environment, including aquatic life.

But perc lingers in another sense. Since 1989, we've known without a doubt that perc is toxic. It's been 15 years since perc was officially listed as a Toxic Substance under Canada's Environmental Protection Act. In 2002, Toronto Public Health identified perc as one of the top 10 carcinogens plaguing Toronto's workplaces and environment. By 2007, Toronto Public Health had written a report and sent formal requests to the federal government asking for swift action to eliminate perc from the dry cleaning sector. Yet to this day, perc is still widely used by dry cleaners across Canada and it's still legal to set up new perc-based dry cleaning operations. 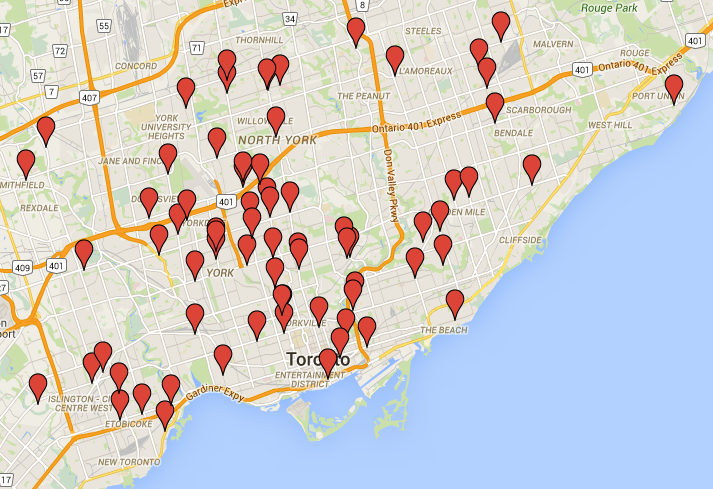 Perc now ranks as one of the top 8 chemicals of highest concern according to Toronto's Medical Officer of Health.

Check out TEA's interactive Perc in Toronto map [bottom of page] for details on which dry cleaners continue to use perc to clean clothes in our city.

Before the passage of Toronto's Environmental Reporting and Disclosure Bylaw and the introduction of the ChemTRAC program, Toronto residents couldn't find any information on which dry cleaners were using perc. In fact, we're the first city in Canada to have this 'right to know' about where these carcinogens are coming from.

It's imperative that we use this wealth of knowledge to affect positive change in our city. Fortunately, TEA was awarded a small Live Green Toronto ChemTRAC Toxics Reduction grant this year to promote safe alternatives to perc such as wet cleaning. Learn more by visiting our Wet Clean campaign page!