Yesterday, TEA's Executive Director, Franz Hartmann, attended a Town Hall meeting on the Greenbelt Plan and other laws that have a big impact on the environment, organized by the Provincial Government to get public input . Here is his report.

It was 9 pm and the 200 plus people at the Town Hall meeting at the Toronto Reference Library burst into applause. We had just finished an intense and productive 2-hour conversation on how to improve provincial laws that govern the Greenbelt, Oak Ridges Morraine, Niagara Escarpment and where development should go in the Greater Golden Horseshoe.

The good news was that government officials were listening. David Crombie, head of the Advisory Panel, was there along with other Panel members. The Chief of Staff of the Minister of Municipal Affairs and Housing was also there, as were over a dozen senior government staff. 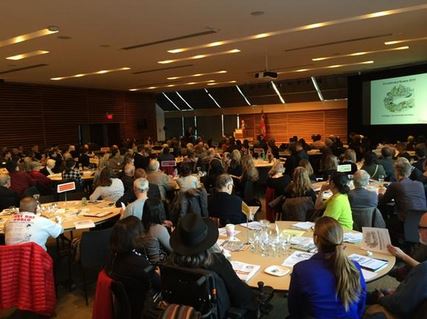 Just as important, people were encouraged to share their ideas. Sitting at tables of 10, everyone had a chance to talk about how the Province could make better laws. All the ideas were written down and at the end of the evening each table shared key findings with the audience.

The other good news was that -over and over again- people were telling government officials to strengthen the laws to protect the Greenbelt, make cities more environmentally sustainable and get ourselves ready for climate change.

I also had the opportunity to talk with a number of TEA supporters who felt inspired by the evening and were grateful for the Town Hall FAQs we created.

Fortunately, for those who missed this Town Hall, there are other opportunities to tell the Province what it can do to help the Greenbelt and build sustainable cities. A Scarborough Town Hall meeting has been set for Tuesday, April 30 at 6 pm (see details here).

As well, people have an opportunity to submit their ideas on line. Stay tuned over the next couple of weeks as TEA develops some FAQs for online submissions.

Finally, it's clear from yesterday evening that people power is the best guarantee that good things will happen to the Greenbelt and our cities. That means making sure your voice is heard.