"Humanity is conducting an unintended, uncontrolled, globally pervasive experiment whose ultimate consequences could be second only to a global nuclear war." Statement from the World Conference on the Changing Atmosphere (Toronto, June 1988).

The global climate system is critical to sustaining life on earth.

Yet there is clear scientific evidence that human activities have caused concentrations of greenhouse gases (such as water vapour, carbon dioxide, methane and CFCs) to rise significantly over the last 200 years. This rise is primarily a result of our over-use of fossil fuels, such as oil, coal and gas. Burning these fuels adds additional greenhouse gases to the atmosphere, trapping heat and warming the planet.

Rising atmospheric concentrations of greenhouse gases have already begun to change the global climate. The ten warmest years on record have all happened since 1998, according to the U.S. National Oceanic and Atmospheric Association. There has also been an increase in extreme weather events around the world, as predicted by climate change models (for those interested in more detail on the scientific debate on climate change, go to www.realclimate.org)

Our planet is warming faster than at any time in the last 10,000 years. As a northern country, Canada will experience some of the greatest warming on Earth.

The first impacts of global warming - increasing floods, droughts, spreading diseases and melting glaciers - are now evident on every continent and in most nations.

Scientists expect these trends to continue. Over the next 50 to 100 years, atmospheric concentrations of carbon dioxide are expected to double or even triple, leading to global temperature increases of between 1.5 and 5.9 degrees Celsius over a very short period of time (relative to earlier global temperature changes which took place over 5,000 - 20,000 years).

Climate change and global warming are matters of life and death. They threaten the survival of ecosystems and the well-being of Canadians and other people around the world. They also have substantial economic ramifications. 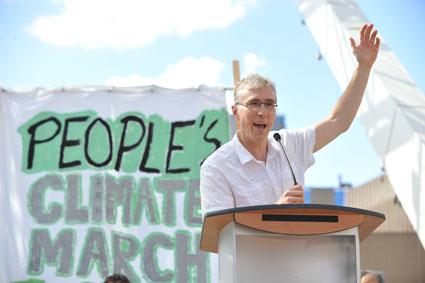 The science is clear. Unless we reduce our use of fossil fuels for energy, we can expect global warming to continue and accelerate. We can expect impacts such as:

By reducing CO2 emissions over the coming decade, wealthy nations like Canada can help prevent unnecessary loss of life, reduce human suffering and economic disruption from global warming, and save plants and animals from being wiped out over wide areas in the future.