Health impacts of smog in Toronto

Air pollution affects the health of all Canadians, especially children, the elderly and those with respiratory and cardiac conditions.

In 2004, Toronto Public Health estimated that 1,700 Toronto residents die prematurely each year due to air pollution (ground-level ozone, nitrogen dioxide, sulphur dioxide, carbon monoxide, particulate matter and sulphates). Another 6,000 Toronto residents are admitted to hospitals due to air pollution. By 2014, thankfully, the numbers had gone down. Premature deaths are now estimated at 1,300 per year and hospitalizations are estimated at 3,550 per year.

Failing to clean up our air doesn't just cause huge amounts of pain and suffering, it also costs our health care system and our economy. According to a 2005 Ontario Medical Association's report, The Illness Costs of Air Pollution in Ontario, air pollution from ground-level ozone and particulate matter costs the Toronto economy:

Premature deaths and hospitalizations are only the tip of the iceberg - air pollution also results in hundreds of thousands of asthma symptom days, respiratory infections, and other illnesses.

Air pollution can inflame and damage lung tissue, especially in infants and children whose lungs and immune systems are still developing. Children get more pollutants into their lungs than their parents because, pound for pound, they breathe more. They also face greater exposure to indoor air pollution because they play on floors where dust and pollutants can linger.

Children, the elderly and those with respiratory or heart problems are most vulnerable to contaminants in our air. Air pollution is a trigger for asthma attacks and recent research has shown that it can cause childhood asthma and trigger heart attacks. On smoggy summer days, however, when pollutant levels are highest, even healthy adults can be affected. 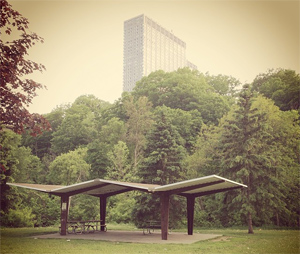 Smog is made up of a mixture of pollutants in the atmosphere. Two of the primary pollutants that make up smog are ground-level ozone and fine airborne particles called particulate matter (PM).

According to the most recent scientific studies, there is no safe level of ground- level ozone or particulate matter. Even low levels of air pollutants can cause inflammation of the airways of the body and bring on asthma or heart attacks.

Ozone is a gas created when its building blocks, nitrogen oxides and volatile organic compounds, interact in the atmosphere in the presence of heat and sunlight. Nitrogen oxides come from many sources, including vehicle engines and coal burning power plants. Human-made volatile organic compounds are produced from motor vehicle exhaust, industrial processes and the evaporation of solvents, oil based paints or gasoline.

Ground-level ozone is harmful to humans, animals and plants. While the ozone layer high above the earth that screens out the sun's harmful ultraviolet rays is beneficial, ground-level ozone inflames the body's airways and causes a decreased ability of the lung to take in oxygen. In children, it is linked to reduced lung capacity and more pneumonia, bronchitis, asthma and long-term lung disease.

The concentration of ground level ozone in Ontario has been steadily increasing at a rate of 0.5% per year for the last 18 years. This trend is likely to continue unless we take action to reduce smog-causing emissions and to fight climate change, for as temperature rises so do ozone levels.

Particulate matter is the name for the tiny, invisible airborne particles from smoke, fumes, dust or pollen which can penetrate deeply into the lungs. These particles pose a serious health hazard. Studies have shown that particles created when we burn coal, oil or gas are more harmful to our health and the environment than natural particles such as dust.

The smaller the particle, the deeper it can be inhaled into the lungs. These very small particles may penetrate the lungs and remain there for long periods of time. Particles that are able to reach the lower regions of the respiratory tract can affect breathing and aggravate respiratory diseases. They increase the daily prevalence of respiratory symptoms such as wheezing, coughing and shortness of breath, and can decrease the lung's working capacity in children and in adults with obstructive airway diseases.

Particulate matter can also bond to dangerous chemicals and carry harmful mixtures of chemical compounds deep into the lungs. Prolonged exposure to these substances is associated with increased disease and death.

The most harmful particulates are acid aerosols - microscopic water droplets smaller than 1/1000th of a millimeter that have sulphuric acid or nitric acid dissolved in them. These types of particulates are produced from the combustion of fossil fuels, including the emissions from car and truck engines, coal burning power plants, home furnaces, cement plants, mining operations and other industrial processes.

Air Pollution ChemTRAC TOXICS AIR QUALITY CLIMATE CHANGE
Do you like this page?