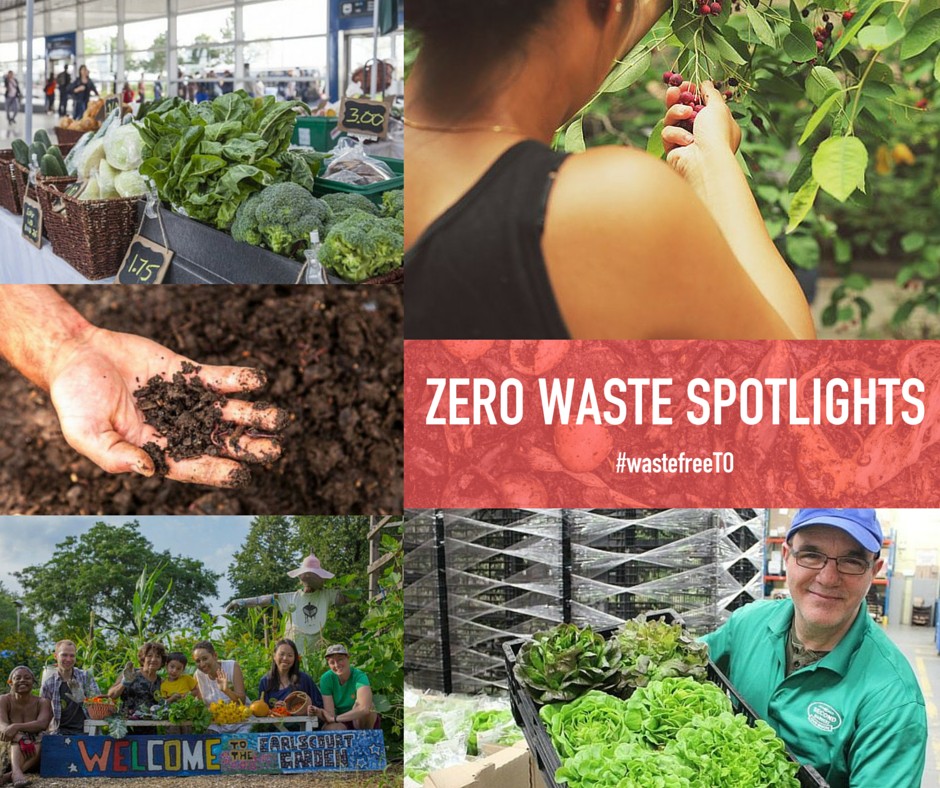 Way too much of our food and other organics end up in the landfill and since 40% of the average garbage bag in Toronto is loaded with organics, it's clear we can and should make some major improvements. Fortunately, we can learn from great community examples from right here in Toronto and from other cities facing similar challenges:

NOT FAR FROM THE TREE This non-profit group connects property owners with volunteers to harvest fruit from trees in Toronto yards to keep it from going to waste. The harvest is split between the owner, the volunteers and local food banks.

ZOOSHARE North America’s first zoo-based biogas plant is funded by community bonds. Its anaerobic digester will recycle manure from the Toronto Zoo and food waste from local grocery stores into high-quality fertilizer and electricity, diverting 14,000 tonnes from landfill each year.

SECOND HARVEST Their Food Rescue & Delivery program collects over 3,700 tonnes of food from stores and warehouses and delivers it to food banks and shelters across Toronto.

VANCOUVER A ban on disposing organics since 2015 means all businesses and residences in the city collect food waste for composting9.

SAN FRANCISCO All of their buildings, including businesses, offices and stores must collect organic waste for composting. Some businesses divert more than 80% of their total waste.

NEW YORK CITY Starting in July 2016, large businesses will be required to ensure their food waste is composted.

TORONTO Small businesses that use Toronto’s waste services and Green Bin divert 64% of their waste, 6x higher than the average!

MAYFAIR ON THE GREEN This Scarborough high rise turned their garbage chute into an organics chute and now boasts a diversion rate of 85%!

These solutions are part of Organics First:Setting Toronto on the Path to Zero Waste, our report that outlines the first steps Toronto needs to take towards our vision of zero waste.

Our Zero Waste Toronto report outlines what zero waste is, what the benefits are to Toronto, and all the ways that we can reduce our waste to zero.

Not Far from the Tree has harvested 58 tonnes of edible fruit from Toronto trees since 2008. They estimate that 680 tonnes of fruit is available each year. www.notfarfromthetree.org

ZooShare will have an estimated input of 14,000 tonnes of commercial food waste per year and an additional 3,000 tonnes of animal manure. This manure is currently composted on-site therefore it is not counted in the diversion statistic. https://zooshare.ca/wp-content/uploads/2014/08/Project-Description-August-2013.pdf

The City of Vancouver’s 2014 food scraps recycling bylaws require all businesses to have food waste prevention and diversion plans as part of their business license. Metro Vancouver imposes fines on waste haulers who have more than 25% organics in their garbage loads.

The New York City Commercial Organics Rule applies to food establishments in hotels with more than 150 rooms, stadiums and arenas with 15,000 seats and large food manufacturers and wholesalers.

Based on City waste tonnages in LTWMS Technical Memo No 1, Appendix C. August 2015

430 Mayfair on the Green at McLevin Avenue. Details established at site visit, report and presentations from building staff Princely Soundranayagam between July 2015 and Feb 2016.

WASTE REDUCTION Zero Waste Spotlights zerowaste
Do you like this page?